Recently I’ve been working a lot, which seems to impede my work here, but about a week ago I took a rare vacation. I spent 3 days in Seaside, OR with my second family, the Paulls. I would have photos to share with you had my memory card of 4 years not decided to quit at the beginning of my trip. Needless to say, the Pacific Ocean was beautiful, and the coastal beach very warm and sunny. I may never decide to have children, but it is a delight to go to the beach with kids who almost never get to (because they live in CO). I also got to canoed, and played in the sand.

A few days later I flew out of PDX, and eventually landed in San Jose, CA sometime after the sunset. I then took the last bus to Santa Cruz, and then walked from the bus stop to the cheapest place to sleep in the area, a dilapidated hostel. Yes, I could have called a cab instead of walking a mile on strange streets, but then I wouldn’t have tasted the night life of the town and met the local vagrancy.

The next morning I walked to a bike rental shop and met up with a kind shop owner who opened his shop early for me so that I might rent a bicycle for the day. Shout out to Electric Sierra Cycles; my day would have been very lackluster without their help. I rented a bike because in Eugene, OR all you need is a bike to get around. A friend of a friend told me in advance that the campus of UC Santa Cruz was “on top of a hill,” so I assumed I would be able to get around fine without a rental car.

Maybe I should back up a bit; I was in Santa Cruz not for the gorgeous coastline, but because I wanted to scope out the Digital Arts and New Media program at UCSC. I’m looking at grad programs all across the country, and this one is has an emphasis on interdisciplinary learning. It is also known for its welcome study of video games and new media both technically and culturally, which is why the program interested me.

In advance I contacted 1/3 of the faculty listed on the program’s website in an attempt to meet with anyone who could tell me more about what the program is really like. Thankfully, I was able to arrange a meeting with 2 faculty during my short stay (a random Thursday), Jim Whitehead and Noah Wardrip-Fruin.

So, I thought it would be simple to pick up a rental bike at 9:30am, meet Jim at 10am, and then chat with Noah sometime after that. Google Maps didn’t indicate that there was a mainstream bus line that circulated on campus, or just what an ascension of 400 feet would look like on a bike, so I assumed that it would only take me half an hour or so to bike 2 miles (the distance from the bike shop to the Engineering 2 building). Little did I know that the Californian to Oregonian translation for “on a hill” is “on a mountain range.” Also, I had a cruiser bike, so I couldn’t fully extend my legs when I pedaled; it made biking on level streets more difficult than I was used to. To make a long story short, I managed to get about halfway there in 25 minutes. At this point, I was dripping with sweat and exhausted. Deranged looking, I walked up to the nearest bus stop where 4 college natives sat waiting. I struggled to make sense of the route maps, but before I could turn for help to one of them a bus rolled up to the stop. All of them promptly got on, and I frantically tried to match the bus’ number to one of the route maps. The driver poked his head around and gave me a questioning look.

“Does this bus go around campus?”

“Sure does,” he replied.

I then proceeded to roll my bike to the rack on the front of the bus. I struggled to properly secure the bike; the driver had to use hand motions to help me figure out. All in all, pretty humiliating. Thankfully I had 2 one-dollar bills floating around in my purse.

It was worth it.

I sat next to the nicest looking person I could find, and it turned out we were headed to the same place. I ended up being a little late to my meeting with Jim, but luckily I had the presence of mind to tell him the night before I might be tardy.

Jim was immensely helpful in explaining the kind of computer-related projects coming out of the DANM program. As department head for the computer science department he was able to speak well to the interesting research going on in some of the labs, and the kind of work the graduate students are doing. I asked him about the importance of knowing computer language going into the program, an area of knowledge I hope to grow in my graduate studies, and he told me it would be helpful if I knew Java and the C programing languages. I got the impression, though, that in a 2 year program like DANM a student doesn’t have time to waste learning those languages. Just like spoken languages, it takes some time to master them. If I wanted to gain any proficiency I would have to start right away, and I think those of you who know me also know how impossible that would be in terms of my schedule. Unless, are there audio tapes for C++? 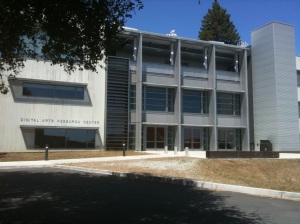 Anyway, the program was beginning to sound more like something my significant other should look into. He is a CIS major who is very interested in things like video game level design. Really, I’m more into the critical analysis of video games as an expressive medium. I want to study new media from a theoretical point of view, and explore how one can communicate stories more effectively through game play. What if there was such a thing as a documentary game? What would that even look like? That’s what I want to think about. The learning of program language is simply a necessary extension of that mission (IMO).

Noah and I spoke over tacos. I have no idea where he ended up taking me, but it was tasty and I was grateful for the food (after all that frantic biking and what not). Our conversation confirmed what I was coming to realize, that DANM might not be the right program for me. At this juncture, I’m not entirely sure if I would fit into the structure of the 2 yr. MFA program, as I will likely need about that much time to grow my programming skills. Also, the only technical expertise I have is in filmmaking, which isn’t necessarily a new medium. Not that there aren’t interesting, innovative ways to apply film. It’s just that I’m not sure that I can imagine a capstone project that I could launch into within a year that would fit the guidelines of what they are looking for. Many of the current MFA students and 2nd year MFA students have tangible projects they are working on that seem to be an extension of skills they had going into the program. For that matter, my portfolio of work doesn’t demonstrate any proficiency in the “new media” art or work they are likely looking for in applicants. From our conversation, it sounds like I need to be looking more closely at Ph.D programs, or MFA programs that are more closely related to skills I want to develop further. A Ph.D program will give me more time to develop computers skills, and allow me to focus more on critical theory and study around new media, rather than developing a project. 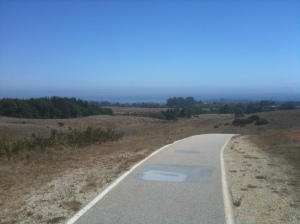 Noah also recommended a swath of schools around the country I hadn’t thought of before, and that I look to the places where faculty I admire are based. So, I’ve started that list by going through captivating literature I’ve amassed this last year and writing down the names of authors I need to research further. Interestingly, many of the names I’ve come up with originated from articles written during a Ph.D program or Masters stint. Hint, hint? Overall, I feel quite invigorated. Almost enough so to start studying for my first GRE test coming up in September. …Almost. 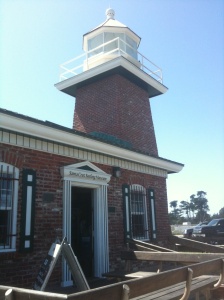 After meeting with Noah I decided to simply enjoy the rest of the day as an ol’ fashioned tourist. It was at this juncture that I actually appreciated my bicycle the most; riding out of campus from the DANM Research Center was hands down my best experience there. The bike trail was gorgeous, and well kept. I coasted down the whole way, onto Bay St., and then to the boardwalk. I stopped by the Santa Cruz Surfing Museum to appreciate the local historical landmark.

I leisurely coasted to the boardwalk, and was generally unimpressed with the fanfare and rides. There is definitely a part of me that remains suppressed without my better half around. Sometimes I think it’s my inner child, although, I was definitely attracted to almost every fried-on-a-stick concoction for sale. The most ridiculous, of course, being the “Dessert Chimis”— seriously? These would either be delicious or terrible; for $4.45, though, I wasn’t willing to find out. I was also amused by all of the intricate machines, manikins and animated figures.

Laffing Sal stood out to me; I couldn’t decide which appealed to me more: that she mocks short people, or women, best. Perhaps both. Her title card read: 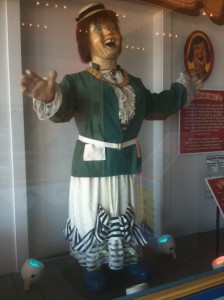 “Between 1930 & 1950, almost 300 Laffing Sal animated figures were sold by the Philadelphia Toboggan Company. The giggling, gyrating woman with the gap-toothed grin was used to entertain and draw in visitors at the entrance to fun houses, dark rids, roller coasters and midways at amusement parks of that bygone era. Using the original laughing soundtrack, this Laffing Sal is one of the few remaining original characters known to exist today.”

After walking aimlessly about the boardwalk for about 45 minutes, I decided to return to my bike and cycle back into town. I returned the bike, and then walked to find diner. The Saturn Cafe was recommended to me by the same friend of a friend who had misled me about campus, but fortunately she was spot on about this eatery. I recommend any burger on the menu (I went with a veggie option), and the mint chocolate chip milkshake was a real winner, too.

The next morning I flew out of San Jose (remembering to arrive at the airport hours ahead of time) and went onward to Bozeman, MT. I spent the night there with a best friend who attends MSU for the film program there. My short time there was intoxicating, though. I’ll be back.

Now I’m back to the grind in sunny Eugene. FIG season is warming up, and classes begin in a month. My vacation was much too short.